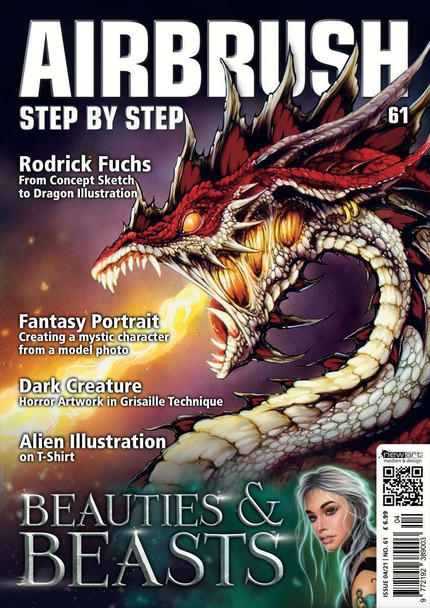 Red dragon
From concept sketch to dragon illustration
Canadian-based artist Rodrick Fuchs is not only a top-notch airbrush artist, but more importantly, he is blessed with a unique talent for drawing. Who can draw a dragon by heart....

Mermaid
Fantasy portrait
Based on a conventional portrait photo, Spanish artist Juanjo Baron has given his model something magical and mysterious.

Inspired by the Renaissance
The Fantasy Art of Ed Beard Jr.
Ed Beard Jr. has been making fantasy art and illustrations for over 40 years - on just about any surface and for over 1,000 products that have been published featuring his work.

Captive creations
The somewhat different artist life of Michael Wood
Michael Wood from Texas has been in prison since 2006. But it's thanks to his incarceration that he's been able to airbrush, make art his profession, and even offer commissioned work.

MSRP:
Now: $7.00
Was:
Airbrush Step by Step Magazine 04/12 Printed issue - physical product. Moonrise: A Soft Angle of Death on Illustration BoardMichael Calandra got swept up in the inspiration of transforming his...

MSRP:
Now: $4.95 - $195.00
Was:
Createx 4050 Gloss Ultra-Violet Light Stabilizer Clear  UVLS clears are water-based, architectural-grade clears made for interior and exterior applications. UVLS Clears are made with an...

MSRP:
Now: $225.00
Was:
GSI Creos Mr. Airbrush Custom 0.18mm PS-771 (Chrome plated version of the legendary PS770)  Important message from SprayGunner Team: Yes, we plan ahead and we were supposed to have...

MSRP:
Now: $10.00
Was:
SprayGunner Drawstring Backpack  Made from us for you. Pack almost anything. Pack clothing, materials, any sort of product on the go. Has our signature logo to help us spread out the...

MSRP:
Now: $15.00
Was:
SprayGunner Light Gray T-Shirt  We designed these T-shirts for our loyal customers and partners to spread the brand and stand out with our signature color Orange. It is a unisex T-shirt,...